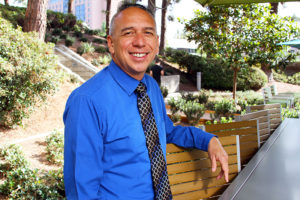 Having worked together since 1995, Mike and our former Partner, Alex Matuk, joined the Firm in April 2002. Since then, Mike has worked with Strazzeri Mancini in every aspect of the firm. His transition into the firm brought his paralegal experience in Litigation and Business Planning. In addition to his assistance with our computer network and website, and a year as the Office Administrator, Mike has cross-trained in the FamilyCare™ Estate Group and has been the lead Strategic Assistant and Paralegal to the FamilyCare™ Estate Succession Department and FamilyCare Business Group.

Mike continues to grow both professionally and personally. He currently works as the firm’s Director of First impressions and Director of Digital Technologies.

Personally, Mike can often be spotted throughout San Diego with his dogs Boots and Bandit.  Their favorite Sunday afternoon activity is laying in their back yard, the OB dog beach while Boots plays with the other dogs.  He spends his fall, winter, and spring months enjoying the San Diego Gulls and the Los Angeles Kings.  His patience in awaiting the return of the San Diego Gulls and professional hockey to San Diego has been fulfilled. He has formerly served as the Vice President of The Colony, a Gulls’ fan-based Booster and Community Support Club and facilitated the transition of the Colony to be the Official Booster Club of the San Diego Gulls.   He continues to root for the Los Angeles Kings’ in their drive for their third Stanley Cup.#LetsGoGulls  #GoKingsGo

< Go Back
Back To Top